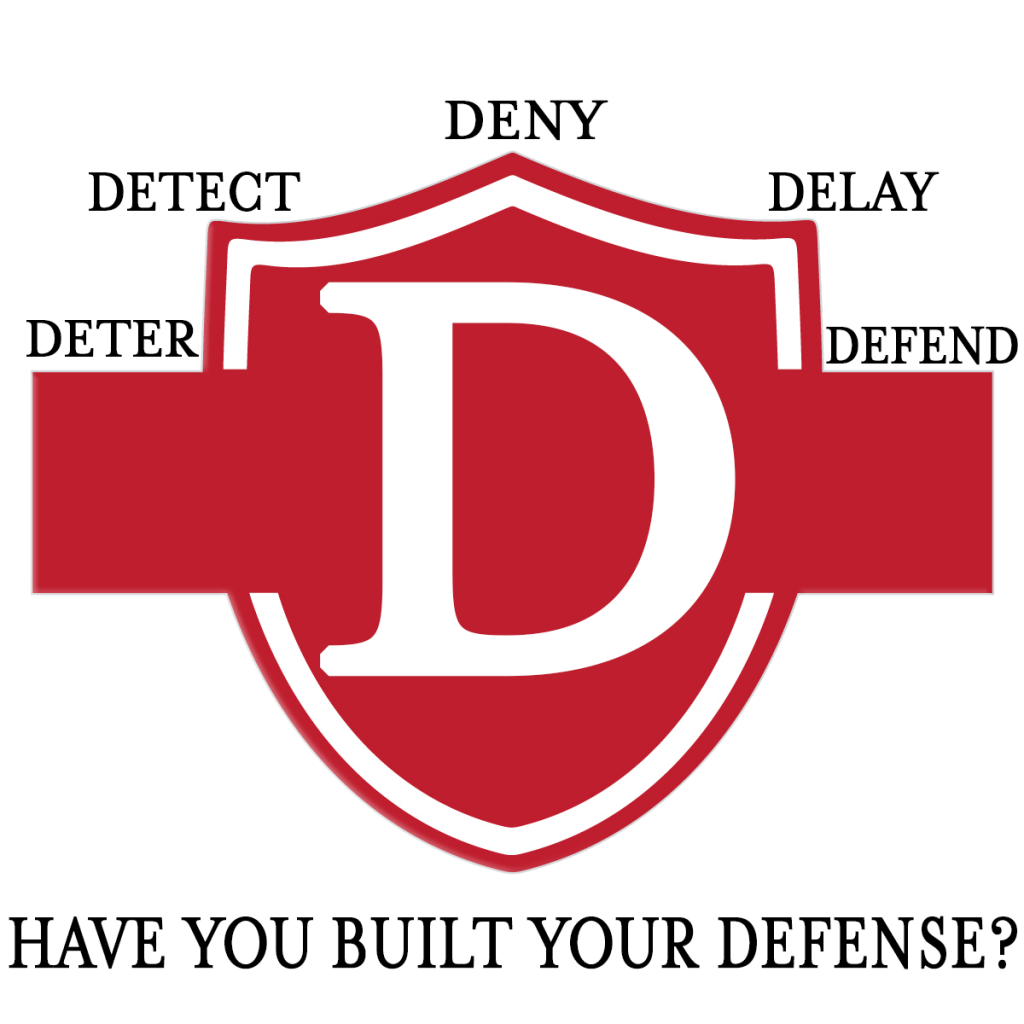 Consider this – since humanity’s existence, we have thought about protection. In the beginning, we created boundaries using makeshift barriers and walls; now we accomplish this with security alarm systems and video surveillance cameras. Joe Morgan, of Security Today magazine, writes,

“think of your perimeter security strategy as a series of concentric goals, what the industry calls ‘The Five D’s of Perimeter Security’. You first need to deter a threat. If the threat isn’t deterred, you want to make sure you detect it. If the threat progresses, you need to devise a way to deny it entry. Barring success at that stage, you need to delay the threat from doing harm until help arrives. And in the interim, you need a mechanism to defend your facility [or self / home].”

If you made it through that long and informative quote, your first thought may have been threat?! What exactly does he mean by threat?  The obvious threat is burglary; some no-gooder who wants to steal your possessions or peace of mind. Have you also considered the threat of vandalism? Perhaps, your neighborhood pre-teens are bored this summer. Give them access to a spray paint can or carton of eggs and threat takes on a new meaning. Or, you may have your own independent teenager who doesn’t abide by house rules. Exchange teen for threat and security could mean protecting what’s already inside from getting out (at inappropriate times).

Maybe you made it to the end of Joe’s quote and thought perimeter security strategy, like I have time to worry about one of those! Every home, business, and family is different. Each will have distinct vulnerabilities and concerns depending on location, building construction, number of entry points, etc. Your perimeter (and overall) security strategy should be tailored to your needs and you shouldn’t have to worry about figuring it out. Preventia provides a free consultation with a knowledgeable sales representative to identify vulnerabilities in your home or business. After identifying your needs and concerns, we can design a custom solution, ie strategy, for you. Whatever your threat, concern, or need, it’s important to consider the Five D’s.

Deter: discourage or prevent from acting.

You can deter a potential threat with smart home automation devices. Smart Scenes activate indoor / outdoor lights at specified times and control window shades to give the appearance of someone being home. If you don’t have automation devices, you can still deter threats with motion-activated outdoor lights and by keeping shrubbery around ground-level windows well trimmed.

Detect: discover or catch (a person) in the performance of some act.

You can detect a potential threat with cameras and sensors! Video doorbell or WiFi-connected cameras can be programmed to detect and record motion while sending notifications to your smartphone. Door, glass break, and motion sensors also help to detect threats on site or inside. When it comes to detecting a threat – the sooner you know, the better.

Deny: withhold admittance to. Delay: to stop, detain, or hinder for a time.

If your strategy fails to deter or detect, you want to deny and delay a threat. Slowing access time to your home or business could mean the difference between an insurance claim and an arrest. Denying or delaying can be accomplished with a ferocious dog or smart electronic door locks. Look for a lock with cut-proof deadbolt and tamper-resistant keypad. Our preferred electronic door lock, from Yale’s Real Living line, features a free spinning bar inside the lock cylinder and no keyway!

Sirens and sensors are crucial to defending your home or business from a threat. Often, a siren’s piercing peal is enough to scare away would-be burglars. Sensors, detecting motion or forced entry, send signals to waiting operators and burglars may be caught red-handed! Sensors also provide situational awareness which is key as you and emergency responders approach potential threats.

As your threats evolve so too should your security strategy.